A Little Walk on the Highline Trail

by Linden B. (Lindy) Sisk

On Monday, June 13, I took a little walk up to the Highline Trail.

I left the park at 5:20 A.M. It's only about a 42 mile drive to the trailhead, but the last 10 miles are so are up a heavily washboarded dirt road with a speed limit of 25 miles per hour. I stopped on the way at Big Meadow Reservoir to take this picture.

Big Meadow Reservoir has a large campground, which was closed last year, and not scheduled to reopen until sometime in 2012. The well went bad there, so they had to truck in water the last year it was open. In addition, there are many dead trees in the campground which need to be removed. Most were killed by pine beetles, but some were also downed in a downburst from a storm. In addition, toilet facilities are being revamped to provide enhanced access for less-enabled persons. It's a shame that it's taking so long to get that done, because it's a beautiful campground where we have stayed many times. The campground can be used as a base to explore the many excellent and popular trails in the area, as well as access the Continental Divide Trail.

I arrived at the Hunter's Lake Trailhead, and was on the trail by 6:40 A.M. From the trailhead, it's only about a half mile down to Hunter's Lake, which is a pretty little lake. It was difficult picking my way past the lake itself due to snowpack still under the trees, and because the lake was quite high from the melting snow, so the actual trail itself was under water in several places. This is Hunter's Lake, at an altitude of 11,380 feet.

Once past the lake, the going got easier once I picked my way over some rocks and found where the trail emerged on the other side. The trail winds through a pretty meadow which was free of snow, and the going is pretty level until the trail enters the trees and starts to climb up to the Highline Trail about three-quarters of a mile past the end of the lake.

In the next half of a mile, the trail climbs 500 feet. That's a 20 percent grade, or one foot up for every five feet forward. It wasn't too bad until I reached the point of a switchback in the trail about two-thirds of the way up, when I lost the trail in snowpack. There was no way to find it, so I simply climbed about 200 vertical feet straight up through the trees and snow until I got to the top, and was able to use the map in my GPS to find the Highline Trail.

Once on the Highline Trail, I found some serious snowpack between where I was and the point where the Highline Trail ascended another 500 feet to about 12,500 feet, an altitude it maintained for several miles to the south. The picture below shows my hiking staff at the edge of one of the drifts. That staff is 54 inches tall, and one can see that the drift is about that deep. 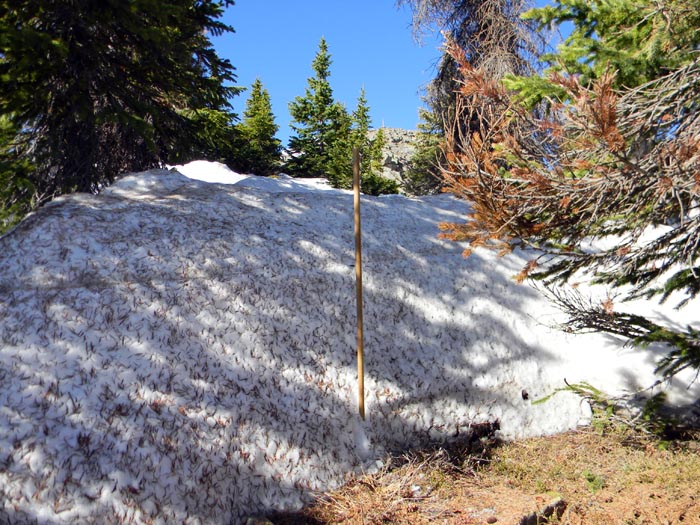 I was able to pick my way around most of those drifts. Where I couldn't, sometimes I was able to place my feet in the depressions in the snow made by a couple of earlier hikers. Some of those depressions were very deep - hikers call those deep depressions "postholes", and the process of traversing snowpack like that is called "postholing". It's quite tiring, and you wind up with snow in your boots and wet feet - unless you have gaiters which attach to your shoes and extend up to just below your knees. I need to order some of those - the ones I have are only about 6 inches high.

Once past the drifts and on the 500 foot climb up to the top of the trail, the going got much easier, as the trail was easier to follow and there were only a few patches of snow a foot or two deep which had to be picked around. At last, on the top, here I am. The elevation is about 12,500 feet, and the views are spectacular in all directions. I got to the top around 9:10 A.M. 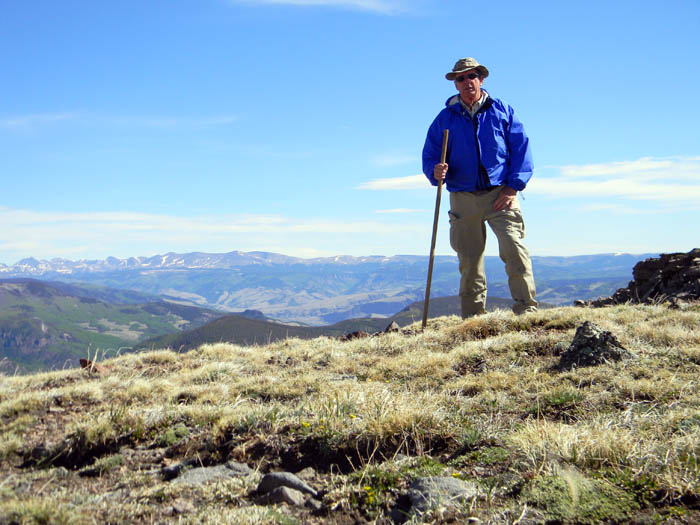 Later in the season, an early climb to higher altitudes and an early descent are essential to avoid lightning from thunderstorms which fire over the high mountains after the monsoon season starts.

Up there, the trail in many places disappears in what is essentially alpine tundra covered in snow much of the year, so the trail is marked with cairns like the one my pack is leaning on below. I packed sufficient gear for an overnight stay, which I hadn't positively decided to make. Whether I did or not, my policy is never to venture far from a road without sufficient gear to comfortably survive an overnight stay, should one become necessary due to weather conditions, injury, or other cause. With two days of food, that pack weighs about 13.5 pounds. I was carrying some other gear like my camera and GPS in a waistpack for accessibility.

The view in this case is to the north. 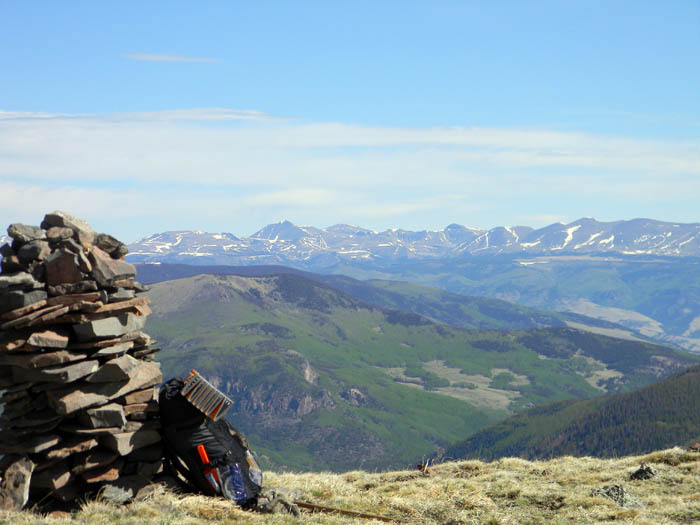 There is still plenty of snow at altitude, as you can see in this shot taken toward the southwest. However, the Highline Trail itself was quite clear of snow as far as I could see. 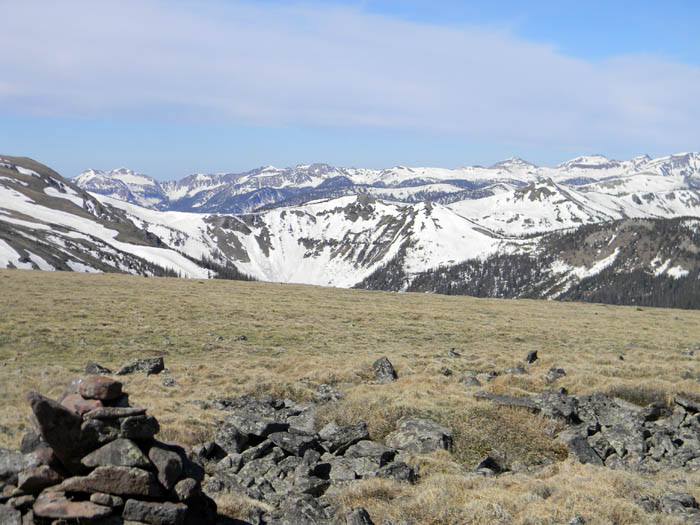 Here's another shot, this time to the east. The farthest mountains visible in this shot are the Sangre de Christo range, about 75 miles away. 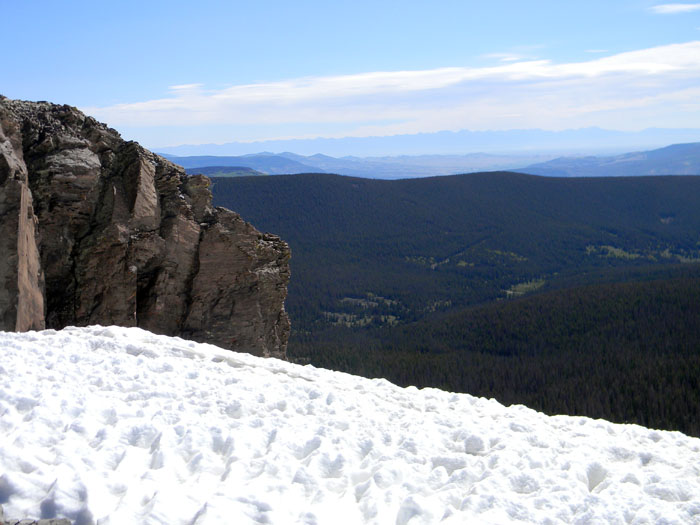 I anticipated hiking further south on the trail and then returning. I spent some time taking pictures and drinking some water, and by that time the wind had started to pick up quite strongly from the southwest and some clouds were starting to form. I know from experience that the weather can quickly turn bad at that altitude, so I decided to head back down the trail in the direction I came from, starting off about 10:00 A.M.

I picked my way back down very carefully, as a fall on that portion of the trail would likely have been fatal. People who say, "It's all downhill from here," have probably never had to descend a steep and dangerous trail. Personally, I'd much rather climb uphill than down, especially on loose dirt and rock. If you slip while ascending, you can often catch yourself with your hands, and you're closer to the slope. If you fall while descending, you may find yourself falling out of control on your butt. A stout hiking staff is a tremendous asset - it gives you a third point of contact with the ground for stability, and is also a great assist in stream crossings.

Once down to the lower part of the trail, I was faced with the choice of returning the way I had come, or continuing down the Highline Trail to the north. I wasn't enthusiastic about picking my way 200 vertical feet down that snowpack to find the Hunter's Lake Trail, so I elected to continue down the Highline Trail, which offered a much more gradual grade back down to the vicinity of the trailhead.

I had not, however, counted on the quantity of snow remaining on the west side of the unnamed mountain which lies west of Hunters Lake, which the trail runs behind. I was able to pick my way around most of the drifts, using the map in my GPS to remain roughly in the vicinity of the trail. I probably walked half again as far in the next mile or so as I would have if the trail had been unobstructed by snow drifts. However, I was never in any danger of falling, as the grade on that portion of the trail is quite gentle.

Once past the deep drifts, the rest of the hike was delightful, through meadows which were snow-free, although sometimes a little boggy from the melting snow. I got down to a point where I had the delightful view below. It was warm in the sun, and if I'd had a hammock to suspend between two trees over the unlevel ground, I'd probably have spent the night. 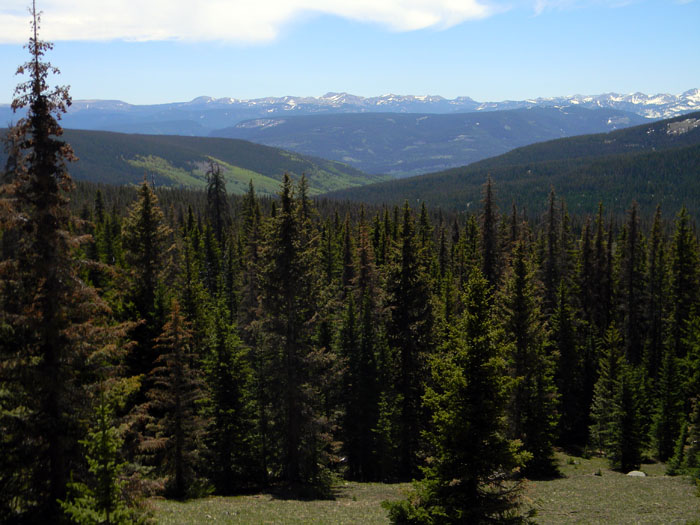 A little note about equipment is probably in order here. There were several times where I'd have had great difficulty in finding the trail because of snowpack as well as areas with a lot of downed trees, without the Delorme PN60 GPS I carried. Combined with the TopoUSA PC software from Delorme, one has access to topographic maps of the entire United States. Selections can be downloaded to the GPS from the PC. I currently have topographic data for most of the western U.S. preloaded in the SD card in the GPS. In addition, the PN60 WSE I have interfaces over a Bluetooth link to a SPOT satellite transmitter, which enables one to send messages through orbiting satellites. Those messages can include messages to emergency rescue organizations.

Since I am doing most of my hiking solo this year, I consider this a very valuable safety feature. The SPOT transmitter can also be used to alert rescuers without the GPS, but the GPS interface to the SPOT transmitter allows sending other messages to family and friends.

I got back to the truck about 1:00 P.M. I sat in the sun on the tailgate of the truck eating lunch - elk summer sausage with cheddar cheese and jalapenos - and taking a few sips from the flask of single-malt Scotch I packed with me in case of an overnight stay - essential equipment...

I might have decided to stay and camp overnight at the trailhead, but the clouds moved in, and the temperature dropped markedly, so I decided to return to civilization.

I stopped to take the picture below of Shaw Lake on the way down. It's a sizable little lake very popular with fisherman. Facilities include a boat ramp. If you look in the lower right-hand corner of the photo, you can see a blue two-person tent. If you're looking for peace and quiet at night, I bet Shaw Lake in an excellent place to find it. 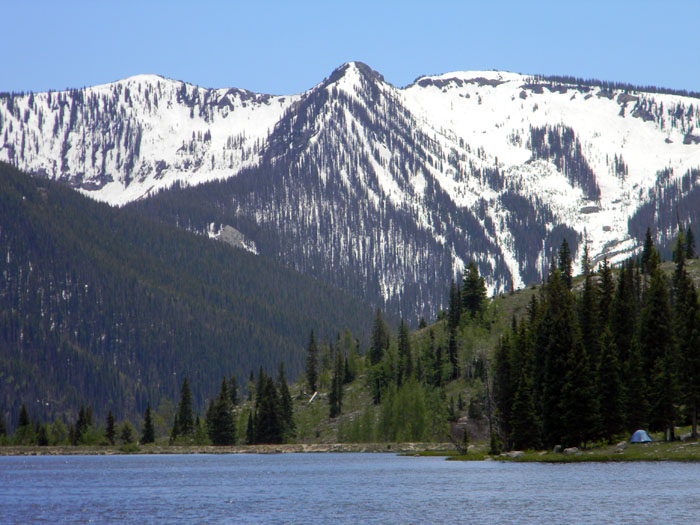 Nice day. I hiked probably 6 miles with about 3,000 feet of total elevation gain and loss. It beats the heck out of working out in a gym somewhere. I'll take it.